Effective July 1, 2016 prices for dog boarding will increase to $25 per night & cat boarding will increase to $15 per night. The price for dog walking will increase to $18 for 30 minutes. In researching other area businesses & professional sitters my prices are highly competitive---in fact I am still lower than the others. In addition my prices are, as they always have been, all inclusive. There are no a la carte fees for holidays, weekends, medications, late pickups, last minute bookings, pick up & delivery to your home or trips to pick up food or supplies for your pet. CLPS has been providing loving care to your furry family members since 2007 & I hope to continue to do so for many more years.
Posted by Shelly at 9:54 AM 4 comments: 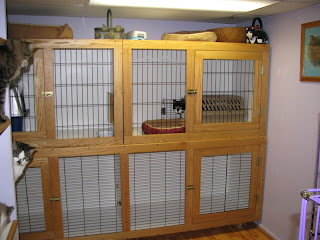 Pet Sitting in Your Home

Service will include feeding and changing water, scooping litter boxes, picking up mail and newspapers, watering plants, playing with your pet and medications if need be. I will walk your dog if it is leash trained. My usual visit length is 45 minutes.

My usual service area is within a 10 mile radius of North Smithfield. I will service outside of that area but there is an additional mileage charge.


Pet Boarding in My Home

I also offer limited overnight boarding at my home. Small to midsize dogs who are good with cats are housed in my home and are treated just like members of the family. All dogs are crated overnight. Larger dogs are housed in a kennel in an out building on my property. This is heated and air conditioned. There is also a large outside kennel for dogs to enjoy some outside time. All dogs get several bathroom breaks per day and then they also get longer walks (depending on the health & fitness of each individual pet). These walks go up in range to about 3 miles per day. Dogs that like other dogs get social play time. This service is dependent upon which dogs are in residence at any given time.

Cats are housed in custom made cat condos. A photo of these is attached. The condos are duplex size so they can definitely fit two kitties--with an adjoining door that can be closed if the kitties start to get on one anothers nerves. Cats are allowed out at least once a day to run around the cat room to get some exercise but if your kitty doesn't want to come out, it is not forced to come out. How much time outside the condo depends on occupancy numbers.


Prices are subject to change. Call me with your info for a price quote.

This service is limited to the immediate area of North Smithfield. Dogs must be leash trained.

Here is a link to my online reviews:

There's been a lot of changes in my life since I last posted. The kennel I was working at was sold and I left there at the end of September. So I decided to expand my business and I'm now also doing dogs and offering very limited in home boarding. This involved building an outdoor pen for dogs and also a couple of indoor pens for large dogs. Smaller dogs can be housed in my house. Things have worked out well so far and I have stayed fairly busy since leaving the kennel.

It's been interesting as to which dogs take well to this sort of thing. Dogs who the owners felt would never get along with my cats and would be terrible have been absolutely fine. Dogs who appeared to be more laid back needed to be segregated from the kitties.

It does work out well for the dogs though as they get much more one on one time then they would get at a large boarding kennel . They also get longer walks and much more exercise (if they can tolerate it). Walks and exercise are always tailored to the individual pets needs.
Posted by Shelly at 2:16 PM 2 comments:

I'm going to try and get better about posting. I have a tendency to get so busy with work and having a few of my own crew being elderly means I'm dealing with quite a few kitties who have some chronic health issues. I also adopted another diabetic kitty at the end of April 2009. She has needed quite a bit of care. Besides dealing with the diabetes she also had to have a toe amputated on her hind foot. But enough on that for now.

Happy Spring to all my Furry Friends!

With the spring holidays almost upon us, I wanted to send out a warning regarding Easter Lilies and other plants in the lily family. If you have cats in the house, do not have any sort of lilies in the house, including Easter lilies, Tiger lilies,Glory lilies, Asian Lilies, Rubrum lilies and Stargazer lilies.. Lilies are very toxic to cats and it only requires ingesting a small amount for them to become tragically ill. Lily plants cause kidney failure in cats. Both the leaves and the flower are toxic and it can take as little as one leaf to be fatal. Within 30 minutes of eating the plant your cat will appear to be depressed, not interested in playing or his usual activites. Other symptoms that come a bit later include vomiting, loss of appetite and weight loss. If you even suspect your cat may have eaten lily material you must get your cat to the vet. Earlier treatment results in a better chance for survival. It is best of you can get your kitty into treatment within 6 hours of ingestion. Odds are reduced when therapy is begun 18 hours post ingestion as by that time kidney damage has already begun. A lot of people may not even notice a slight change in kitties behavior. With all of the usual activity over the holidays it becomes even easier to overlook. The safest course of action is to not even have these plants in the house. If you have a kitty that goes outside, it is not safe to have these plants outside in your yard.

There are many more plants that are poisonous to cats and dogs. Lilies are toxic to only cats. There are also plants to are safe to have around our furry friends. For a listing of both toxic and safe plants you can go to the ASPCA website.

It's been a long time since I've had the inclination or the energy to post. From the middle of November 2008 to the middle of January 2009 I suffered many losses in my fur family. I lost 3 of my rabbits and 5 of my cats. As I have written before it is never easy to lose them, never mind having to make the decision to send them to the "Bridge". Some of my losses were expected, both Nemo and TC had cancer and I knew they were living on borrowed time. Mr. Marley, a 16 or 17 year old diabetic that had started out as a boarder but became an adoptee when his owner died, was sudden but with his age things can be expected. Hobo was sudden, but oral cancers tend to happen in that way and there is never much that can be done with that. But Wolsey, that was so hard and it still hurts to this day. I knew with his laryngeal lymphoma it was only a matter of time but having gone through all the chemo and done so well with the chemo, I really thought he had a chance at a decent remission time. Unfortunately that was not to be, not even 2 months after his last treatment the cancer was back with a vengeance in his abdomen. Exploratory surgery revealed 3 larger masses and a dozen smaller ones. There was absolutely nothing that could have been done. I want to thank the vets at NorthPaws, Dr. Mark Paradise and Dr. David Bergmann for all their support and the excellent treatment they gave Wolsey. I also want to thank all the techs for their kindness and support with an extra special thanks to Cara (who was Wolsey's chemo nurse). Without Cara's loving care I don't think either Wolsey or I would have made it through. Also an extra thanks to Dave Bergmann, who supported me with his kind emails. He helped me to see things rationally when I was too overwhelmed to see things for myself. NorthPaws Veterinary has a really great group of people there.
Posted by Shelly at 5:32 PM No comments: 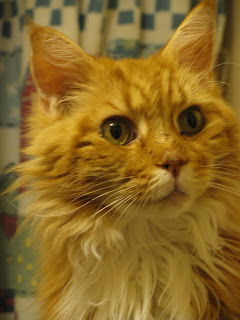 This is Wolsey. The best Maine Coon ever. The better part of my heart died with him.
Posted by Shelly at 12:59 PM 1 comment:

Well the holidays are upon us and I hope all of you are enjoying the season. The month of November just seemed to fly by. I did suffer the loss of one of my kitties, Nemo. I had to have him euthanized on November 20. He had been tentatively diagnosed with a nasal tumor about 2 months prior to this. As the options for treating nasal tumors are not that good, I decided to forgo any further testing and give him palliative treatment. He was not in any pain but did have a runny and stuffy nose on and off. That last morning when I got up, he was lost and could not get down off the sofa on his own. He was almost acting like he was blind, but it was more than that as he didn't respond to his name or anything. He also kept pressing his head against the wall. I brought him into my vet and he felt that the mass had grown into his brain at this point and he had suffered some devastating brain injury with no hope for recovery. So I made the decision to let Nemo go as the Nemo that I had known and loved was already for all intents and purposes gone.

This is never an easy decision to make even when it is the right one. Having as many pets as I have had I've had to make this decision way too many times. It can also be hard when you feel like you are dealing with it alone. A lot of friends or co- workers just can't understand how devastating this sort of loss can be. It's also a difficult loss for an elderly person to suffer as often this may be their only home companion. No one should have to go through this alone so I've decided to utilize part of my nursing background (my specialties were gerontology and psychiatric) and offer grief support as one of my services.

I also want to give a plug to Final Gift. They are the crematory who handled Nemo and they are just wonderful. His ashes were returned on the 24th . Included in the bag with his urn was a pawprint ornament with Nemo's pawprint and his name on it. Since there was no further info on it I had thought it was done by Final Gift, however due to tragic circumstances I just found out that it was actually done by my veterinary clinic NorthPaws Veterinary Center.
Posted by Shelly at 1:43 PM 4 comments:

Promote Your Page Too